Adrenaline courses through the readers’ bodies as they read Schuff and Bullard’s new release.

“Across The Border” by Scott Schuff and Jim Bullard will be displayed at the Los Angeles Times Festival of Books on April 23-24, 2022, at the University of Southern California Campus, Los Angeles, CA.

More than a hundred thousand Americans died last year from overdoses or drug-related crimes. Four billion dollars went to the Sinaloa-Durango Cartel's (SDC) coffers and a hundred times that amount was spent attempting to halt the tidal wave of death from slamming across the southern border. The SDC stays one step ahead of the Americans thanks to the cartel's spies in the American government and law enforcement. With public uproar at an all-time high, the president of the United States has issued a secret executive order to the Drug Enforcement Administration (DEA).

"Across The Border" is a suspenseful and action-packed story about America's quest to eliminate the Sinaloa-Durango Cartel. This must-read work will appeal to fans of historical fiction and those with an interest in military history since it is very topical and loaded with historically accurate insight into America's self-proclaimed War on Drugs. The cartel poses a serious threat to the United States, and bringing it down will need a combination of intelligence, determination, and ruthlessness.

The story of this book is about a former Navy SEAL and CIA covert agent named Jason Maines who is recruited to assemble a clandestine, off-the-books DEA squad with one goal: to eliminate the SDC. To form the foundation of his squad, he adds Mindy Sinclair, a brilliant FBI analyst and SDC specialist, as well as Raul Vega, a trusted and skilled cartel persecutor.

Is Jason Maines and his team up to the job? Grab a copy of “Across The Border” by Scott Schuff and Jim Bullard and find out! Available at BookBaby, and visit the LA Times Festival of Books 2022.

Quote / Jason soon learns that honor in warfare has no place in the fight against the cartel.

Title | Across The Border

Scott Schuff was born and raised in Arizona and has a familiarity with the border. He has traveled the well-littered paths where the migrants and the drugs flowed. He spent 35 years working with his dad in the Steel Fabrication industry, taking the company public in 1998. In 2013 he sold his business and began writing this book. Over the years, it evolved into what we see today.

Jim Bullard is a retired U.S. Air Force Lieutenant Colonel with a background in Intelligence and Special Operations. He is the author of several published works for the military community, a dedicated family man and professional musician. He and his wife Belinda reside in Northwest Arkansas. 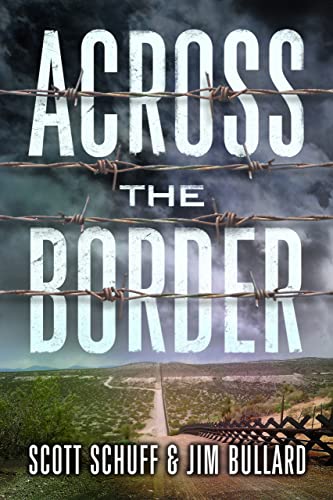 Across the Border Review by Kristine L